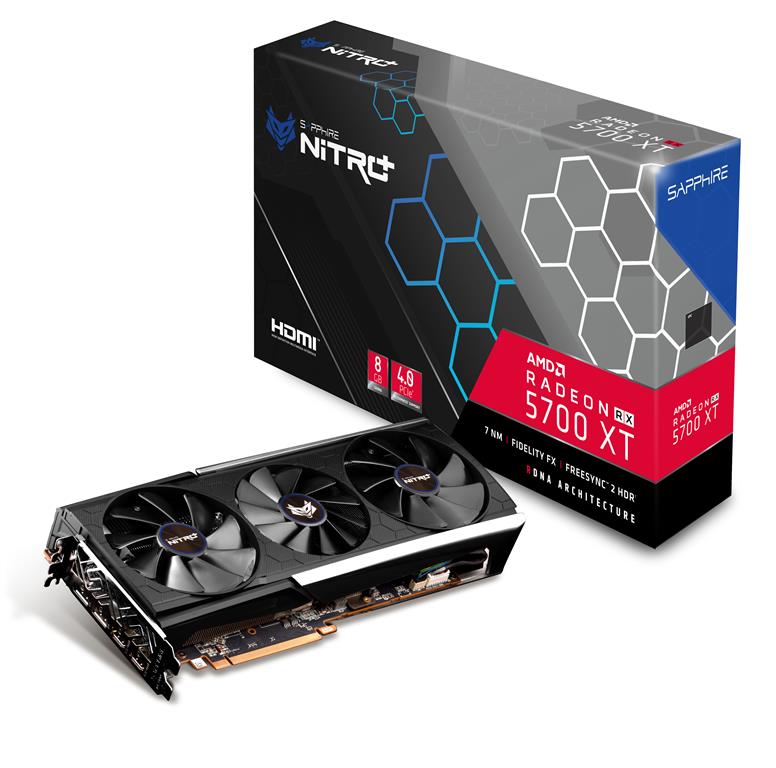 September 16th, 2019 – SAPPHIRE Technology announces the highly anticipated NITRO+ RX 5700 XT Graphics Card for those gamers looking for unrivaled reliability and power in high-end gaming graphics. Equipped to drive the most demanding AAA game scenarios, the NITRO+ RX 5700 XT card features the award winning Tri-X cooling performance and a set of quality components to ensure maximum reliability. Its beautiful design has been crafted with contours to suit any PC build. 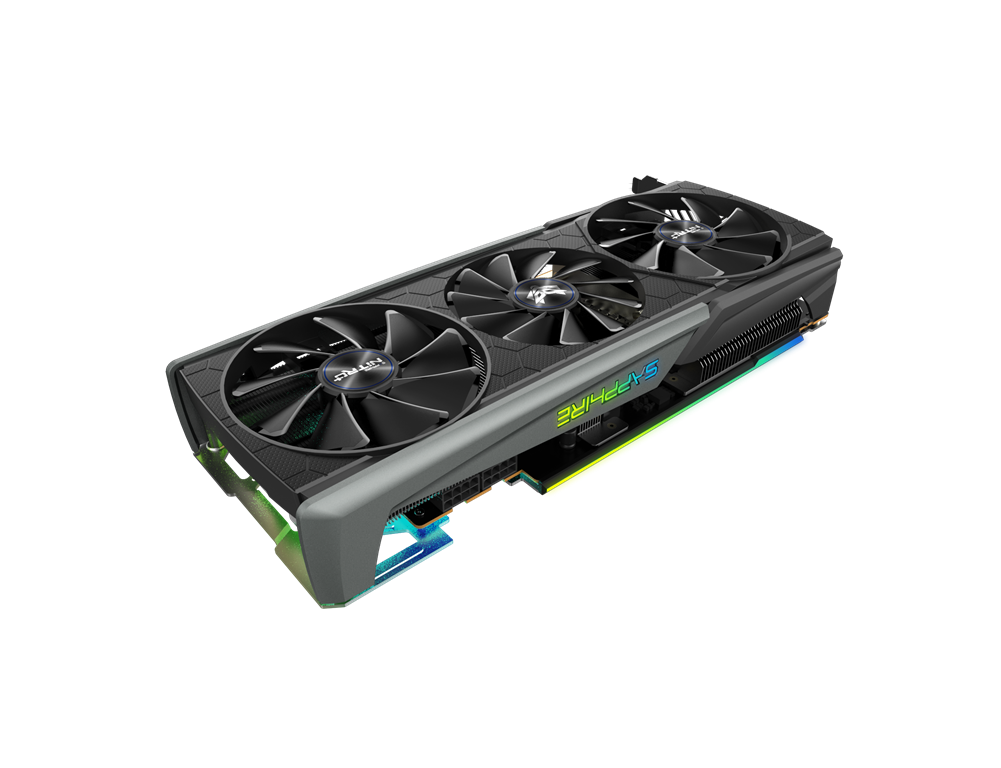 The NITRO+ RX 5700 XT graphics card delivers a maximized 4K immersive gaming experience. It features a GPU with 2560 stream processors running with three clock settings including a Boost clock of up to 2010 MHz and a Game clock of 1905 MHz. The latest 8GB of GDDR6 high-speed memory clocked at 14 Gbps Effective with PCI Express 4.0 support, delivers twice the bandwidth for a great gaming experience.

With its state-of-the-art radiator design, the Tri-X cooling solution is designed to be one of SAPPHIRE’s most efficient coolers. Heat is dissipated by a trio of newly designed silent dual ball-bearing fans. Two, slightly larger on each side running anticlockwise, and a smaller middle fan running clockwise to ensure optimal airflow. The tunneled fins on the fans aid in increasing the convection of airflow enabling Tri-X to maintain temperatures under 75°C while gaming and run up to 13 dBA quieter.  With an 8 + 1 + 2 Phase Digital Power Design, the NITRO+ RX 5700 XT successfully unleashes the full potential of AMD’s RDNA gaming architecture. The SAPPHIRE Intelligent Fan Control feature ensures that the fan speeds on the NITRO+ RX 5700 XT is controlled to keep the GPU, memory, PWM IC and other components as low as possible in temperature to balance performance, and fan noise. An improved Quick Connect Fan system means they’re easy to remove, clean and replace, with just one screw holding them securely in place.

One of the hottest parts on a next-gen graphics card is generated from memory. A Robust Memory Cooling solution has been integrated into NITRO+ RX 5700 XT to cool down memory with a specially designed independent cooling module. In addition, the NITRO+ RX 5700 XT comes with a solid and stylish Aluminum Backplate with built-in ARGB to provide additional rigidity that guarantees nothing bends and dust stays out. It also helps cool your card by increasing heat dissipation.

In an exciting development, gamers who own a NITRO+ RX 5700 XT now have the option to upgrade to a set of the NEW SAPPHIRE ARGB Fans. This optional upgrade has been designed specifically for the NITRO+ RX 5700 XT card to add some more colour and increase the ARGB functionality of the card. 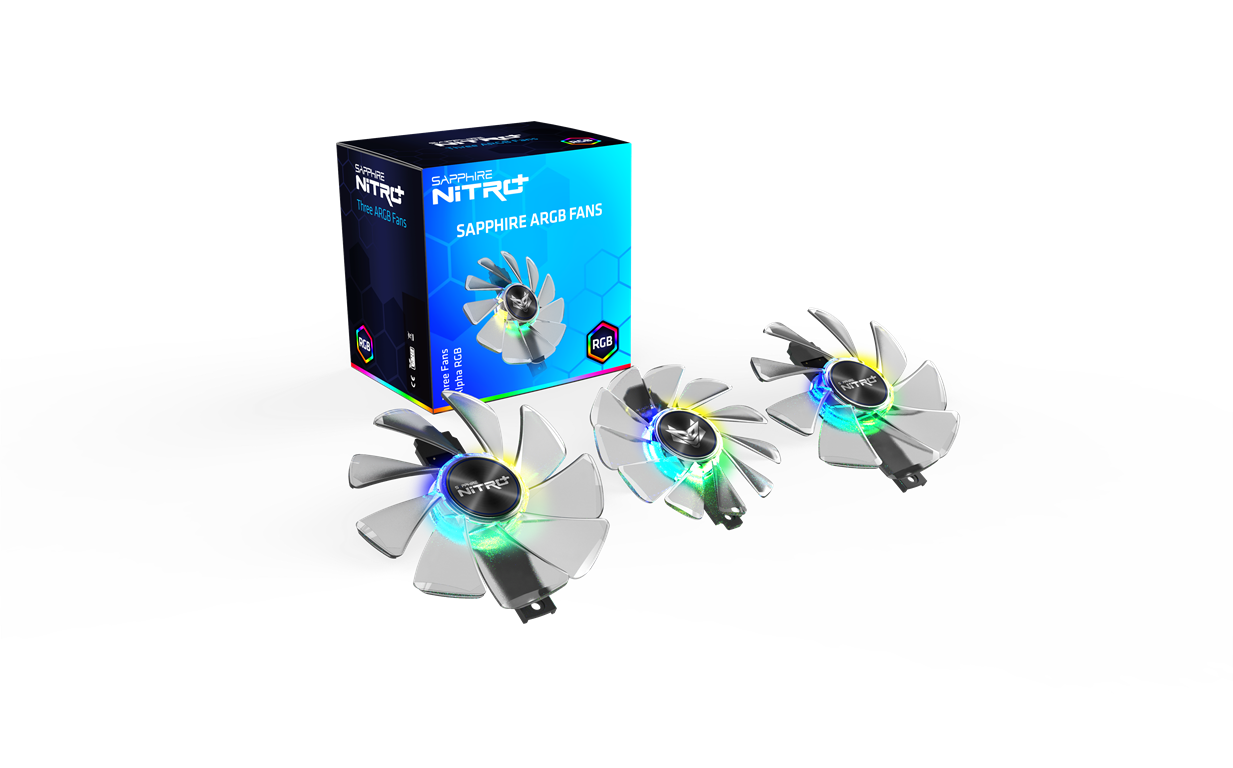 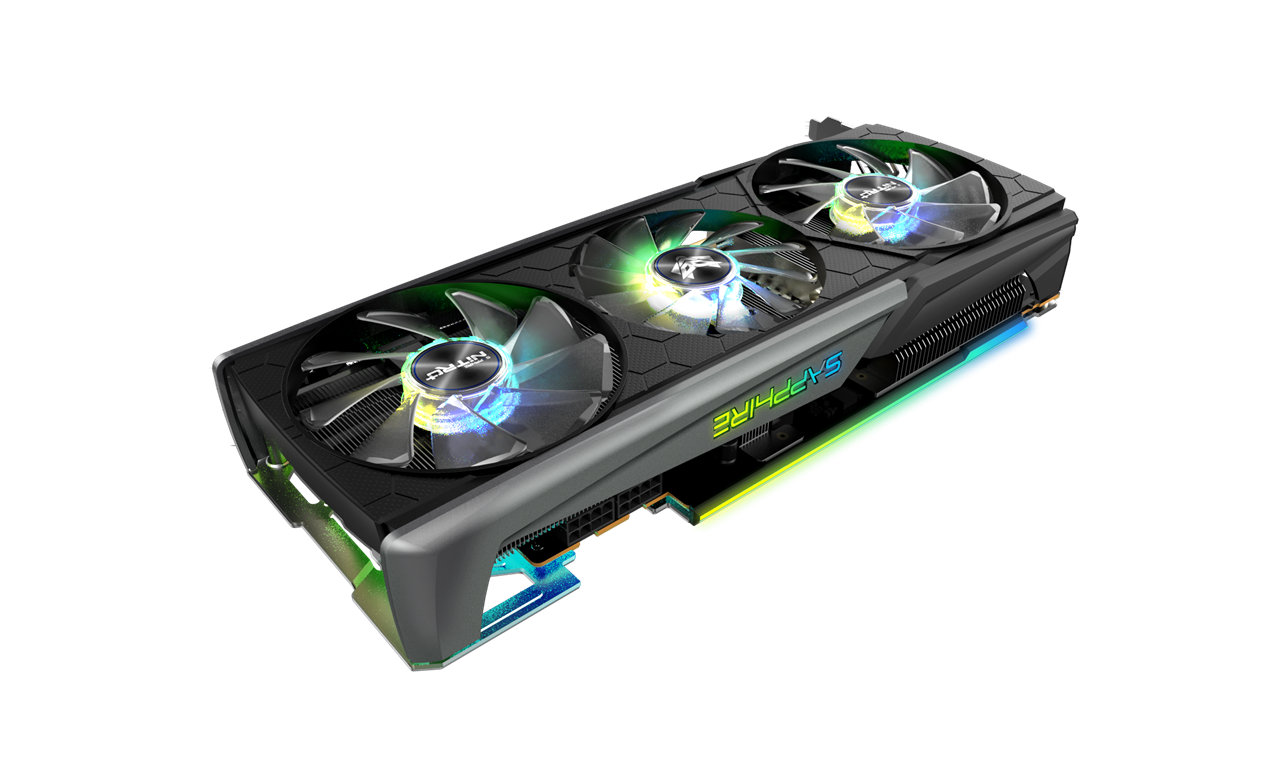 Featuring two larger 95X15mm fans and one 87X13.5mm fan both addressable to deliver 16.8 million-color RGB illumination, the transparent high performance fans use dual ball bearings for longer life and deliver both improved airflow and noise reduction to enhance the beauty of your gaming PC.

Furthermore, SAPPHIRE recognizes that for some gamers prefer LED effects throughout the entire PC system. With this in mind, we have included a 3 pin header in the tail of cards that provides an option to synchronise the ARGB LEDs between both the NITRO+ RX 5700 XT and the motherboard. Gamers can select if the graphics card performs the RGB LED effects independently or if the motherboard acquires control. 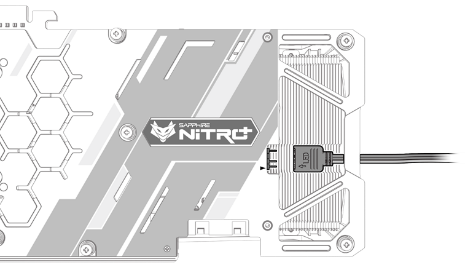 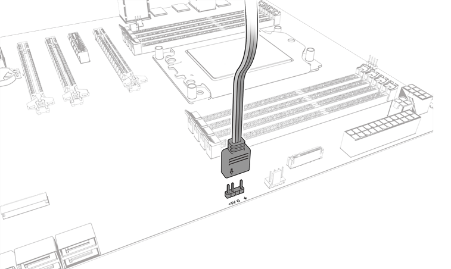 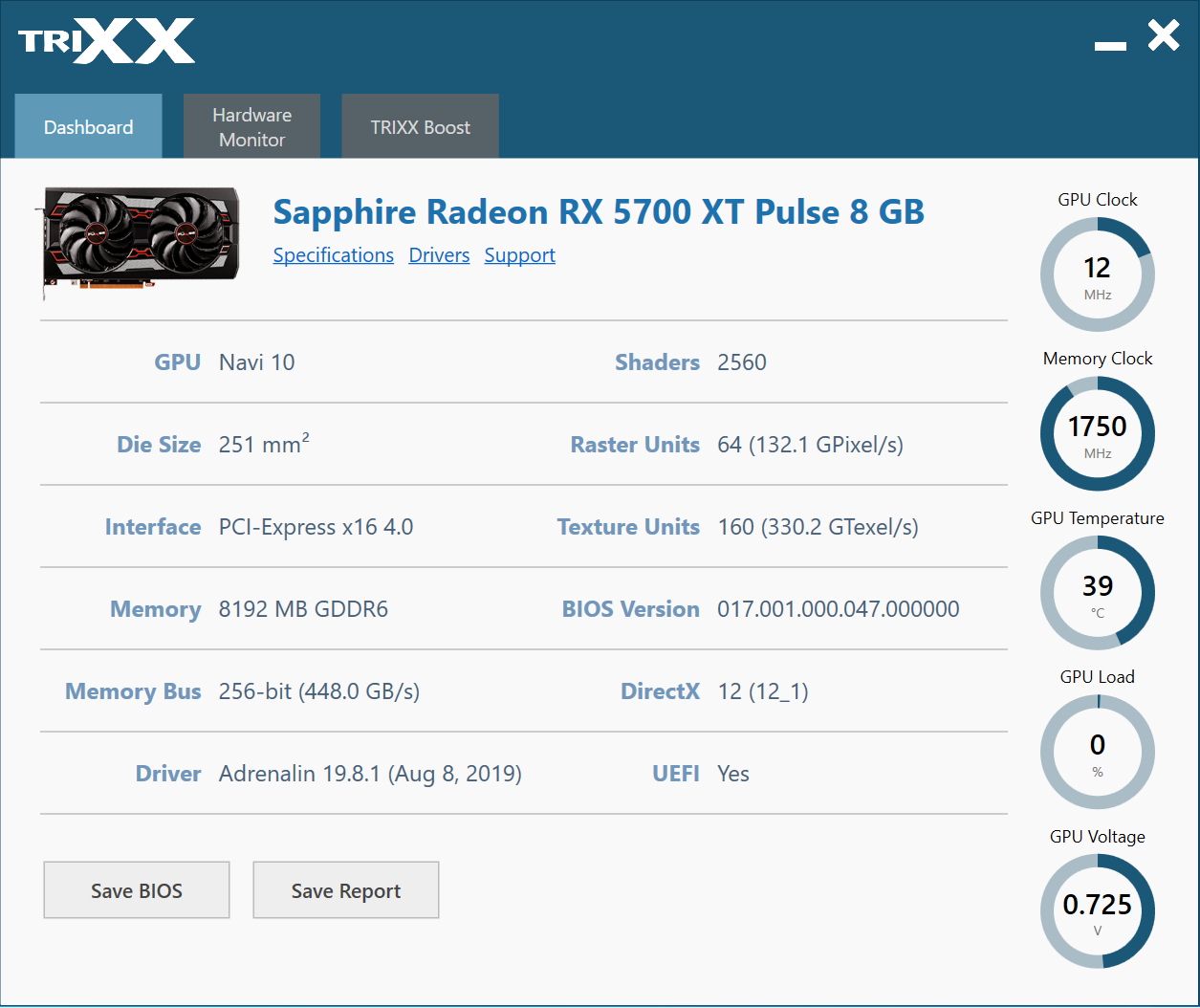 With the New TriXX Boost feature, in order to gain higher game performance with given hardware, gamers can choose to run their game at a lower resolution. Traditionally the available resolution choices are fixed to a small set of options. With TriXX Boost, additional custom resolutions are created, based on user input, which gives much more fine-grained control over the quality vs performance tradeoff. 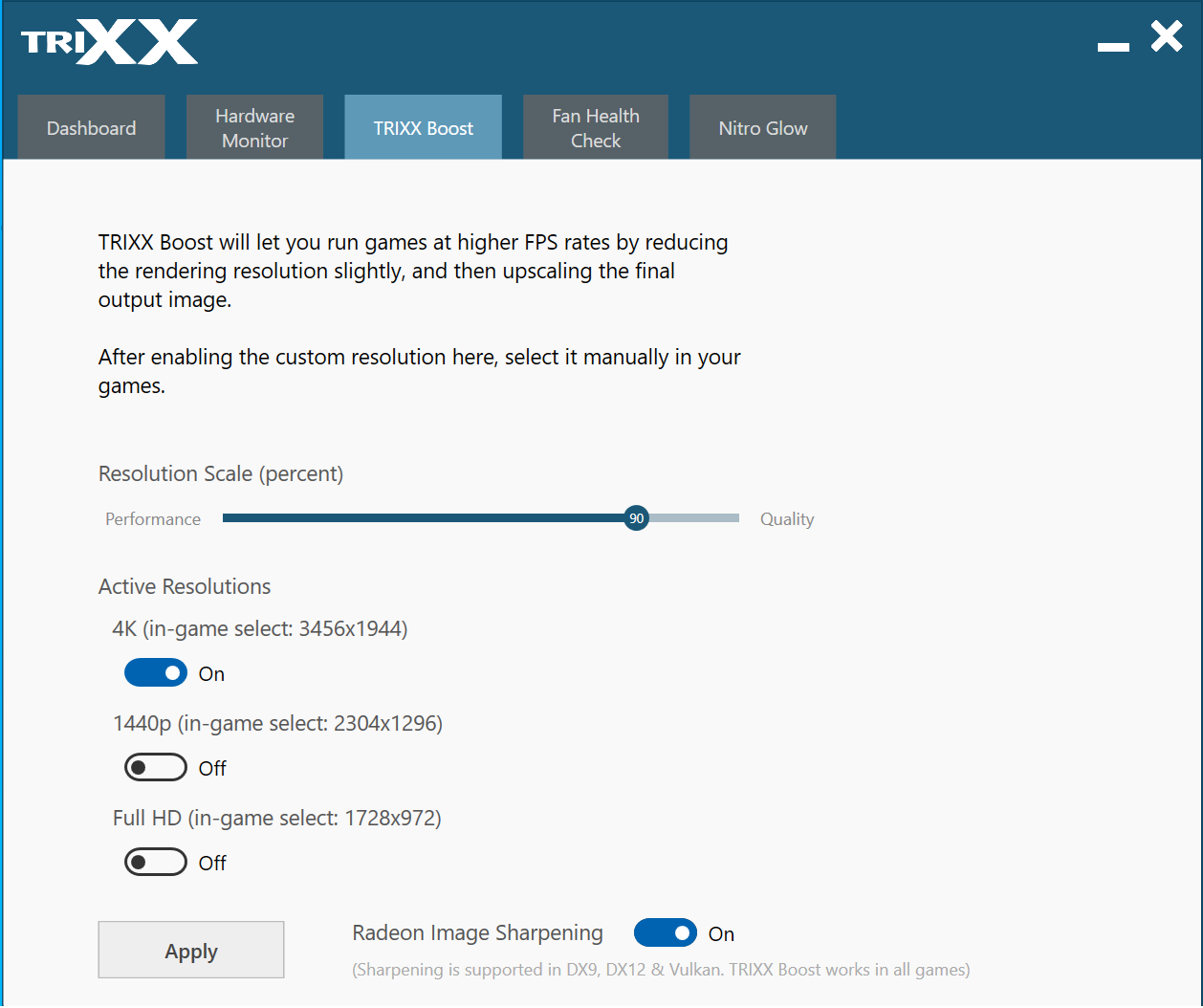 The TriXX NITRO Glow utility has been significantly expanded and improved in the NITRO+ RX 5700 XT. The logos at the top of the card and on the back plate have been augmented with ARGB LED effects for a fully customizable appearance. 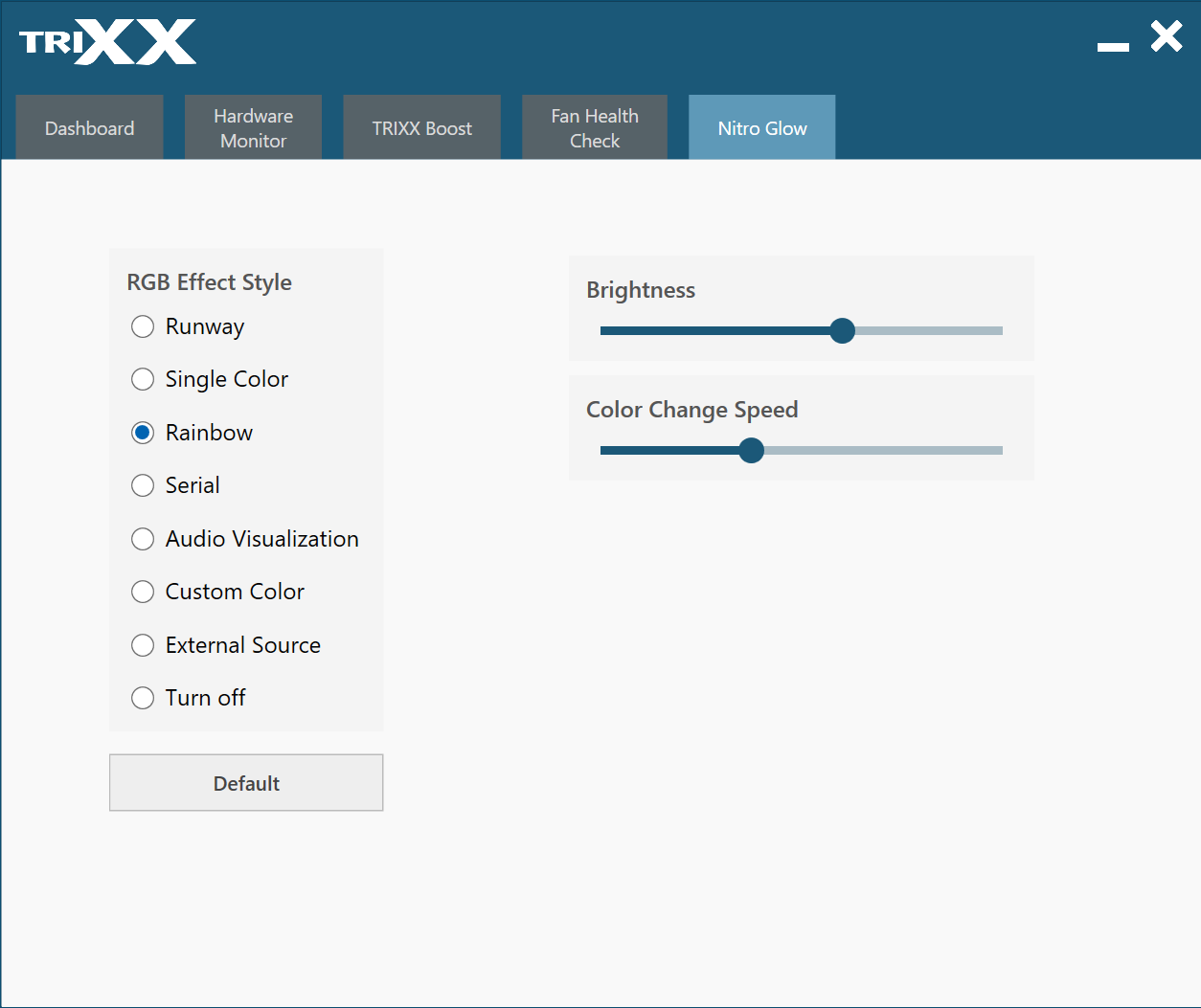 To make sure the Tri-X fans on the NITRO+ RX 5700 XT run at optimal levels, the SAPPHIRE TriXX Fan Check utility will test the fans to ensure they are performing properly. 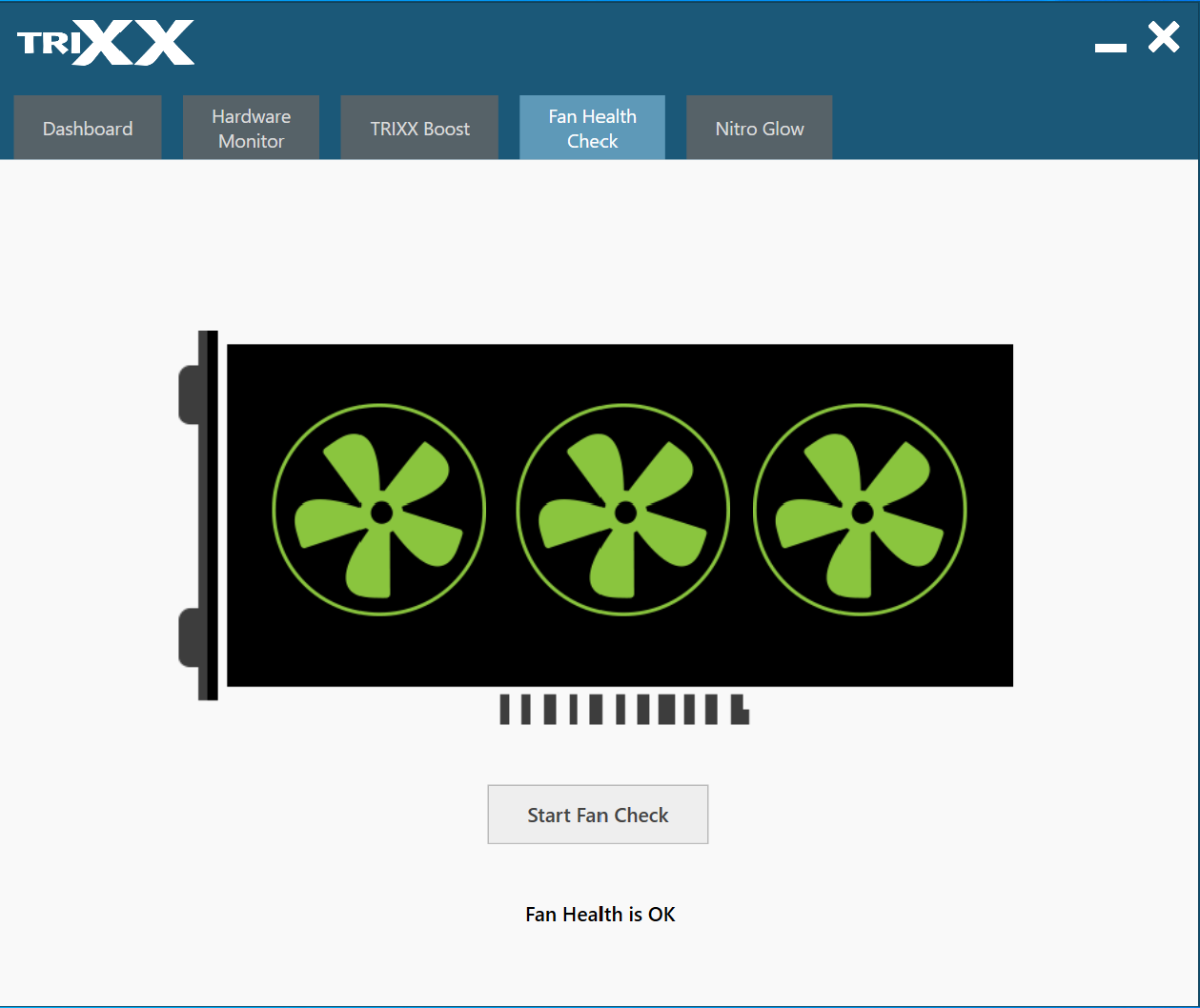 SAPPHIRE’s TriXX Hardware Monitoring allows gamers to monitor in real time the various data points of the NITRO+ RX 5700 XT’s performance and assists with overclocking or even trouble shooting. 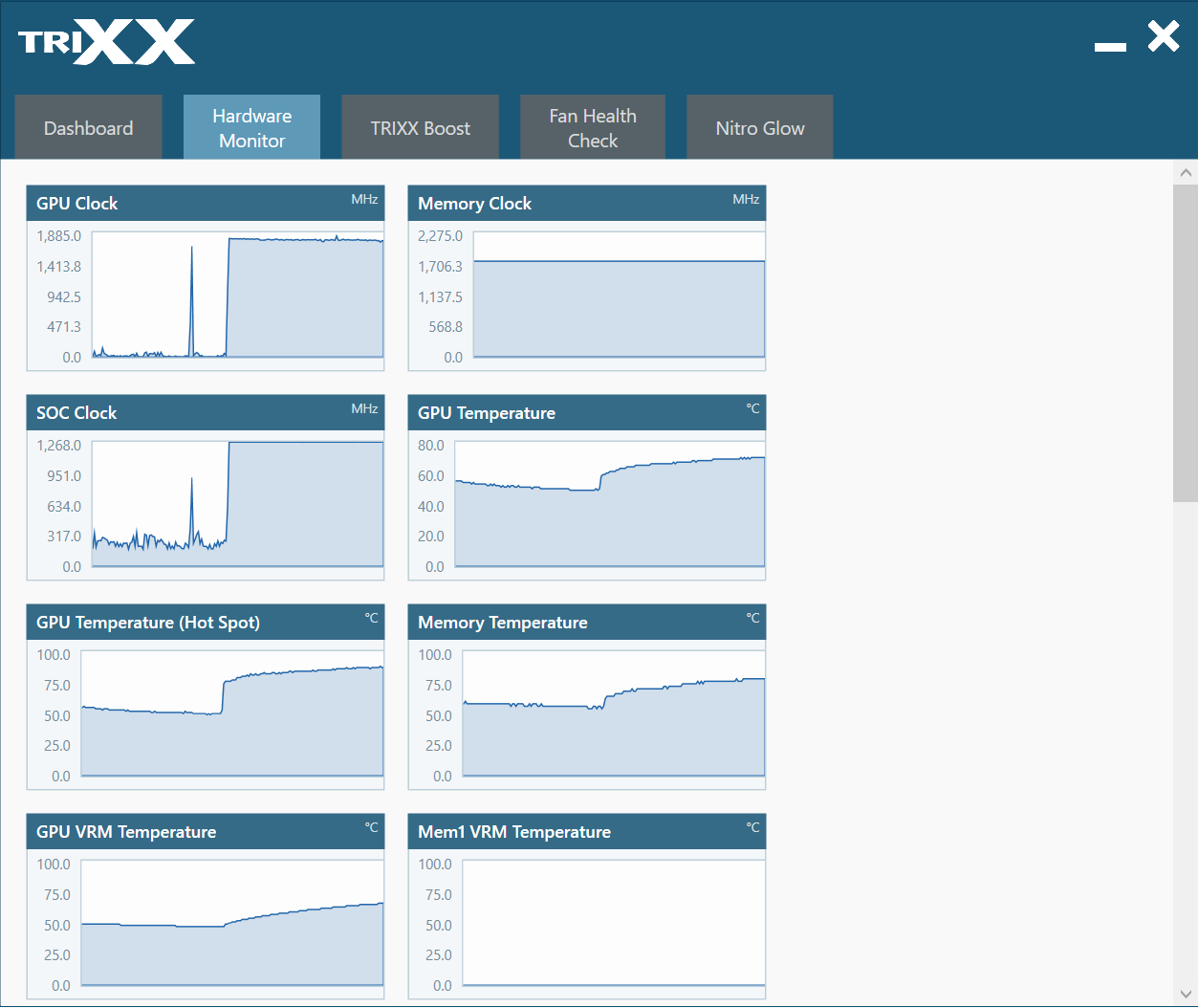 The NITRO+ RX 5700 XT comes equipped with a slew of modern technologies and durable components that ensure a long and stable life. The SAPPHIRE DNA, SAPPHIRE COOLTECH and SAPPHIRE PLUS feature sets are there to ensure the best possible gaming performance. They encompass all of the extra features that make our SAPPHIRE Boards so special and unique with superior cooling technologies to keep your temperatures low at high framerates and quality components that prolong the life of our products through quality, robustness & reliability.

The SAPPHIRE Nitro+ RX 5700 XT Series is shipping now, and will be available from selected SAPPHIRE e-tailers and retailers worldwide.